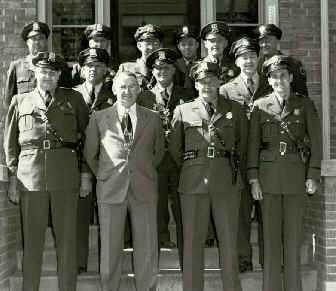 Walworth County was formed by legislative act early in 1838 and was named in honor of Chancellor Ruben N. Walworth of New York. County officers were nominated and elected the same year and began their duties and terms of office on January 7, 1839. The Walworth County Sheriff's Office was established in 1839 in the Territory of Wisconsin, 9 years before Wisconsin became a state. Sheldon Walling of rural Lake Geneva was the first of four territorial Sheriffs.

The first Walworth County Jail was erected in 1840 and was the first building owned by the county. It was constructed of logs and measured 14 by 20 feet. The first jail stood for 12 years. The Sheriff was then, as he is now, the official custodian of the county jail and the prisoners committed to it. If the Sheriff himself is committed to jail for any cause, it is the duty of the Coroner to take charge of the jail.

The first jail was also the setting for an unofficial "Work Release" project. One of the early inmates of the jail was William Brown, a young German man who had a very limited command of the English language. He had been arrested for horse stealing. There was no energetic movement to indict him and he was confined to the log jail. The Sheriff at the time, Otis Preston, also took a liking to Brown and allowed him "Freedom of the yard", which included all of Elkhorn.

He worked cleaning up the park and in the evening he would sit in the jail and play cards or visit with townspeople who would stop by to see him. Brown was given a key to let himself in and out of the jail. Two grand juries failed to bring charges against Brown and he was ordered released from "custody". Sheriff Preston found Brown on the park grounds, read him his discharge papers, demanded and received the jail key, and walked over to the jail and locked Brown "out". 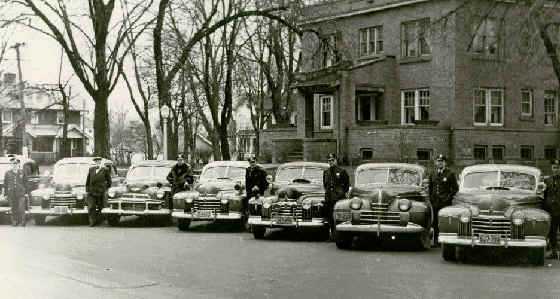 The county board voted on April 21, 1851 to condemn the old jail and build a new one. Four thousand dollars was appropriated and February 1, 1852 was set for a completion date. The jail was built on the Northeast corner of Court Street and Church Street in the City of Elkhorn. It was constructed of stone and brick and was two stories high.

The front of the building served as the Sheriff's quarters, with the jail in the rear section. Escapes were frequent and additional work on the cells was done later to make the jail more secure.

In 1877 plans were made for a new jail - the third in Walworth County history. The structure was completed in 1878 by Janesville Contractors. It was built on the Northwest corner of Church and Walworth Streets in Elkhorn. The total cost, including the lot, was $10,546.

It was two stories tall and provided for a Sheriff's residence in the front and the jail in the back, with two tiers of cells. Construction material was mainly quarried stone and brick.

In 1910, the State Board of Control condemned the jail. The new jail was completed in 1915 and cost approximately $35,000. It was built on the same site as the 1878 jail and stood until the mid-1980s. The new jail also housed the Sheriff's quarters (east end, upstairs) and the Sheriff's Office headquarters (east end downstairs). There were cells on both the first and second floors.

In 1911, the County Board appointed a special committee to investigate the method of compensating the Sheriff and his Deputies. It called for the Sheriff to be paid $1,800 per year. The number of Deputies to be appointed by the Sheriff was limited to seven. One of the designated appointees was to be an "able-bodied male person over the age of 21" who was to reside at the County Jail and be paid $300 per year plus room and board at the jail. He was to act as turnkey, deputy, and jailer. 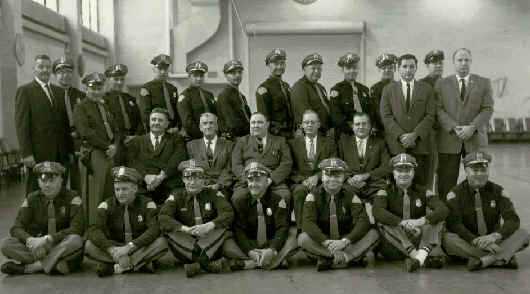 Three of the deputies were to reside (one each) in the cities of Whitewater, Lake Geneva, and Delavan. They were to receive $2 per day for each day while actually engaged in the performance of duties as a deputy, but not more than $75 each in any year (plus expenses).

During June 1929, a regular schedule of hours for the four deputies was devised so that all were on duty on busy days and nights. Each deputy was to have one day off each week. Because of the demand for services and numerous calls, this schedule was not lived up to and from May 1st to September 1st, Deputies O'Brien and Dorr each had only 2 days off and Deputy Gardner had only 1 day off.

As a result of the success of the full-time deputy concept, the salary was adjusted. Starting pay remained at $150 per month but a raise to $175 per month was authorized after 1 year of employment and to $200 per month after 2 years.

One of the Walworth County Jail's most well-known "guests" was Roger Touhy. Touhy and his men were some of the most wanted criminals in the Midwest. On the night of July 19, 1933 Touhy, Triggerman William Sharkey, Eddie "Father Tom" McFadden, and "Gloomy" Gus Schaeffer (once one of the most wanted criminals in America) were traveling near Elkhorn to an unknown destination. Near Bethel Church on Highway 12, their large Chrysler sedan hit a rut and they broke off a telephone pole. They might have escaped had they not been seen by Hugh Squires, who called the police.

Rookie officer Harry Ward, without a car at his disposal, hailed George Wiswell and they drove out of Elkhorn toward the scene. They spotted the car just outside Elkhorn and stopped it. The driver of the Chrysler and the occupants initially denied knowledge of the incident but Officer Ward noticed damage to the car and confronted them with it. Ward insisted that they return with him to the County Jail to settle up and pay for the damages.

Roger Touhy argued the matter and was required to go to jail in Wiswell's car. Sharkey then drove the Chrysler to Elkhorn, with Officer Ward standing on the running board for the trip to the jail. Apparently, Ward and Wiswell believed that the men were just fishermen from Illinois and were here to simply enjoy Wisconsin. Touhy was held while damages could be figured out and the others were given permission to find a cold beer. While they were gone, the vehicle was searched and a considerable number of guns were found.

Touhy was immediately locked up by Sheriff George O'Brien and Deputy Sheriff Joe Dorr and a search went out for the others. Sharkey hitched a ride on a chicken truck to Lake Geneva and called the jail, inquiring about the damage to the telephone pole. He was arrested by Deputy John Cusack. McFadden and Schaeffer were picked up by Officers Ward and Wiswell near Elkhorn.

Touhy went to prison and was paroled in November 1939. He was shot down, gangland-style, only 22 days after his release.

On May 4, 1937, the County Board of Supervisors passed a resolution to equip the Sheriff's and Deputy Sheriff's cars with police radios and the jail with a central radio station. The officers owned their own cars and were given a $200-per-year allowance for depreciation on their vehicle. A special fund was set up to accept contributions to help pay for the radio system and the County Board authorized $5,000 toward the expense of the system. The central system and three cars were equipped to have sending and receiving capabilities. A fourth car was only equipped with a receiver.

In September 1937 the County Board authorized $675 to pay the salary of a second class radio operator from August 14th to December 31st. The new radio station was WM.P.E, a 250-watt station, and was capable of broadcasting "beyond the county lines". Walworth County's new radio system was the first two-way police radio set-up to be utilized in the rural areas of the State of Wisconsin.

In 1962 the Sheriff's Office moved from the building that had served as the jail and office since 1914. The new quarters were located in the West end of the new Walworth County Courthouse. In July 1963, approval was given to construct 3 additional adult cell blocks in the jail and the work was completed in 1964.

In September 1987, because of pressure to address our jail overcrowding problems by the State Jail Inspector, Walworth County formed an Ad Hoc Jail Study Committee. The County's approval in December 1991 to construct the Walworth County Law Enforcement Center on County-owned land at the Lakeland Complex provided a solution to some of the problems. By moving the Sheriff's Office out of the courthouse, space became available to address some of the rest of the county government's needs.